Today is The Korner’s 8th birfday. And it has been five years since I have written on this special day. But with everything that’s going on, and everything that has 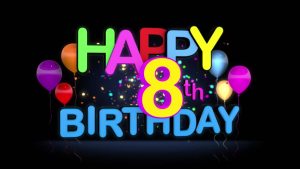 transpired since, this post is a must. So here we go…

For those of you who are unfamiliar with my story, I will fill you in real quick. I started Kassie Nette’s Korner because I wanted to have my own place to talk about sports. At the time, I was engulfed in the life of being under employed. I was working in retail management while trying to revamp my career path. I have always been passionate about sports and was being encouraged by many to re-enter into the industry. Having previously worked in the North Carolina State University Athletic Department for five years, I assumed securing a job would be easy.

No one was interested in hiring a black woman who held a master’s in Parks, Recreation and Tourism Management with a concentration in Sports Management who had previously been employed in various capacities for one of the nation’s premier athletic departments. Frustrated and baffled but not deterred, I became tired of waiting for an opportunity. So, I created my own.

And that’s how The Korner was born.

My expectations were that by carving out my own little nook, I would provide those in decision making positions with insight into the knowledge I had inquired in a space that was largely void of people who looked like me. They would see that I did not just talk about games but I knew the game. They would be interested in me. They would want to hire me. That is how I saw this playing out. One day, you would see me on ESPN.

But that is not how the story goes. It has not even come close to what I had imagined. However, what I received actually changed my life and the direction of it.

As I wrote about sports consistently, from a standpoint of the actual games, the art of them and offering up my opinion about various decision made by general managers, team presidents and coaches, I also uncovered a need to address the social issues that were deeply embedded within the industry.

The first time, I ventured outside of my norm was to shed light on the controversy surrounding a young black girl by the name of Taylor Townsend. At the time, she was 16 years old, the number one junior tennis player in the world and was the reigning junior girls singles champion of the Australian Open and doubles champion for the Australian Open and Wimbledon. But the talk about her was not centered around her accomplishments. It was centered around her body.

Before she traveled to the US Open that year, she was told by the United States Tennis Association that they would not be funding any more of her tournament appearances until she lost weight and got into better shape.

As much as they tried to spin the narrative and make it about their concern for her health, their concerns oozed with stereotypes. Townsend is not your stereotypical tennis player. She is tall, muscular and solid. She had previously played the year before in this same body and it was not an issue. Now that she was sitting at number one and winning, it was a problem.

The real issue was their stereotypes, body image and her skin color.

And I could not possibly allow this story to make its way through the news cycle without addressing it. That is not how I am wired. I learned that at the age of 17 when I challenged people in my hometown to examine themselves as they caused a ruckus over the renaming of our intermediate school.

Through writing, I had not tapped into that side in years but now that it had been awakened, it was game on. Just like that, things began to shift. I could no longer only use my platform to discuss sports in the context of what takes place within the field of play but I had to address the prejudices, double standards and discrepancies within the game as well.

As I began to expand my content across the industry, I began to feel another pull – this time to use my words to address social issues outside of sports. As the years pass by, we should be in a constant state of growth. With that comes wisdom. For a creative, such as myself, it also comes with a need to release the feelings that are swirling around inside through our chosen form of art. To use the outlet I have been afforded to affect change.

I wrote a blog post that had nothing to do with sports.

It was five days after Michel Brown, an unarmed black teenager, was murdered by Ferguson, MO police officer Darren Wilson. The city was enraged and so was I. I was also fearful as evident by the title of the post, “I have NEVER been afraid of the police…”

Initially, I had boxed myself in to only discuss sports. While I was proud of the content I had produced, I knew that was not the only topic I was capable of writing about. But I was hesitant to venture away from my initial purpose for starting The Korner. How could I switch things up when I had already gained a loyal following? Could I mix things up when people expected sports commentary? Or do I ignore my instincts and stick with what was seemingly working?

It did not matter what I thought. The response from the article confirmed the route that was required of me. And from that day forward, I have used The Korner to share my thoughts on many subjects including police brutality, domestic violence, veterans, concerts, friendship, Black Lives Matter, President and First Lady Obama, life, #NotRayLewis, Lexington BBQ, God, my locs, criminal justice reform and the North Carolina coast.

What started as my little oasis where I got to be the lady who shared the sports knowledge she had acquired has helped me hone my gift that has allowed me to amass over 600 bylines, interview top executives at global organizations and have my work featured in national publications.

Writing for many other outlets has made new content scarce here at Kassie Nette’s Korner. For the past four years, every time the site comes up for renewal, I have contemplated not renewing it before I am quickly reminded of its importance in my journey.

Without The Korner, I know I would not be a smidgen of the writer I am today. I look back at my posts and I see days where only 10 people read my article. I look in the latter years and there are days when my views were in the thousands. I am proud of what has transpired and I am excited about what is ahead.

Thank you Kassie Nette’s Korner for being the foundation.

Thank you Kassie Nette’s Korner for being the blueprint.

Thank you Kassie Nette’s Korner for being the launching pad.